A tale of two oceans 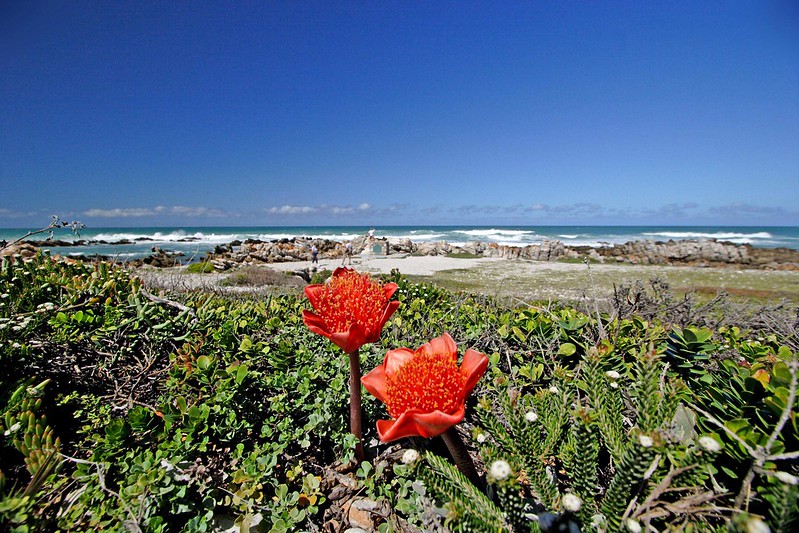 South Africa’s southernmost point is Cape Agulhas, the cape of needles. It does not owe its name to its needle-shaped appearance, as some websites claim. It was so named because around 1500 Portuguese sailors discovered that magnetic north, indicated by the needle of the compass, corresponded to true north.

It is also the division, or the rendez-vous spot – doesn’t that sound better? – of the Indian and Atlantic Oceans. That rendez-vous sets off fireworks! The warm water of the Agulhas Current, which flows south along the east coast of Africa, collides with cold water from the Atlantic Ocean. As a result, the Agulhas Current turns back towards the Indian Ocean, although rings of warm water are cut off from the main current and enter the cold Atlantic Ocean. In addition, where the sea currents meet, strong westerly winds usually blow and all this together makes for very high waves around the cape. In winter, when there are storms, they can reach 30 metres. No wonder there are so many shipwrecks around Cape Agulhas.

However, the climate of the Cape region is rather mild and Mediterranean, with moderate temperatures and moderate rainfall throughout the year. Geologically, the region consists of a sandstone plateau. The sandstone is the habitat of the fynbos, a rare and very diverse vegetation type, with about 9000 different plant species.

Amidst all this natural beauty lie the Lomond vineyards. The cool sea breeze in summer ensures that the grapes ripen late and gather a lot of flavour. The sandstone plateau also makes its contribution. There are small cavities in it, each with a different soil composition. According to the Lomond winemakers, their wines are grown on no less than 18 different types of soil, all of which provide a different character. At Paradisi you will find several of their single vinyard wines, as well as the Romans Bay range for a first taste!